For 20 years, Bill and Michelle DeWitt toiled the land. Their harvest includes both a successful commercial landscaping business and a thriving brewery.

Pull up a bar stool, grab an artisanal beer and listen to how they pulled it off.

“Back in 1998, we purchased 40 acres just outside of Haymarket. We grew perennials, annuals and more that supplied our landscaping business. But over the past two decades, landscaping transformed into an entirely different business. Contract growers now supply the industry,” Michelle DeWitt said. 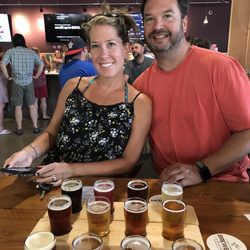 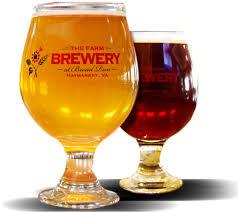 The change provided time for the DeWitts to retool their land into a more productive moneymaker: The Farm Brewery at Broad Run. What made it easier is they both were homebrewers. Going commercial was just a sip away.

But the go-go couple is too busy today to make the beer needed to slack customer thirsts. “I have a professional brewer on my team, Wes Nick, who is our head brewer,” explained DeWitt.

Nick worked in New York State as a brewer for 12 years. After moving south, he worked for some other Virginia breweries before finding a permanent home as DeWitt’s in-house hop artist.

“Our most popular beer is the blonde ale, but we’ve also brewed some fun things like a green coconut curry beer, a chicken wing beer, and a Bloody Mary beer. We like to play and experiment,” said a laughing DeWitt.

On May 11, brewer Nick, in concert with nine other Virginia brewers, will release a series of collaboratively brewed beers. The effort is a healthy reflection of the camaraderie that exists among Old Dominion’s craft brewers.

All this “beerjoyment” unfolds in the brewery’s spacious taproom that seats 250 guests. But the DeWitts have learned a thing or two from other breweries and wineries: how to resolve the conflict between families with kids and folks who are seeking a quieter atmosphere in which to sip.

“We now have a separate facility that seats 70 to 100, adults only, said DeWitt.

A staff of 20 mostly part-time employees makes certain there is no wait for your beer or food. And they are ever-ready to refill your growler if you’ve made the smart move to buy one.

During warmer months, a 6-acre beer garden beckons guests to wander outside and enjoy the balmy breezes in a country-like setting.

Evidence of the DeWitts success is the annual visitor count. “We had about 25,000 people come through the brewery last year. As expected, the winter months are the slowest time of the year. Even Anheuser-Busch says there is a slowdown in sales” when the cold winds blow.

As a result, the brewery is closed Tuesdays and Wednesdays until spring arrives.

The Farm Brewery beers begin here.The basic ingredients of beer are water and a fermentable starch source such as malted barley. Most beer is fermented with a brewer's yeast and flavored with hops. The Dewitts have a playful approach to their varied flavor offerings.

Every Friday, Saturday and Sunday, live entertainment is on the playbill. Jason Masi performs April 19.

Currently, appetites can be appeased with popcorn, soft pretzels and corn dogs. Food trucks offer heavier fare. However, soon the in-house menu will be expanded to include pizza, chicken wings and more. A new brick oven will be the “pie factory” producing the tasty beer companions.

“People need to eat when they drink. A lot of our pizza ingredients are grown on the property,” said DeWitt.

With their agricultural backgrounds, an acre of hops is growing on “bines” on the farm and used in their craft beers. In April, a 2-acre vineyard will be established on site. That’s good news for the Virginia wine industry that is currently experiencing a shortage of grapes statewide.

Bill DeWitt will continue to grow his landscaping business, Community Landscape Services, based in Sterling, while Michelle DeWitt manages the brewery.

In keeping with their “let’s share our good fortune” philosophy, the brewery sponsors four major fundraisers annually. One in May will support the Sweet Julia Grace Foundation. The organization supports families dealing with the heartache of caring for a terminally ill child.

On June 8, there will be a series of bike rides emanating from the brewery to raise money for Serve Our Willing Warriors. The organization operates the Warrior Retreat at Bull Run that offers a beautiful home to qualified veterans and their families in need of a much-earned convalescing and pampering vacation.

To further add to the excitement, the blended DeWitt family of six is soon to embark on another life experience: becoming empty nesters. “Our youngest is about to finish high school and we are excited,” said DeWitt.

In reflecting on the success of their plant-based kingdom, Michelle DeWitt says, “I love agriculture and the brewery was a natural transition for us. It’s a fun business. It’s new and exciting every day. I’m blessed to make beer for a living.”

The Farm Brewery at Broad Run is located at 16015 John Marshall Highway. To catch the fever, drop by thefarmbreweryatbroadrun.com to learn the full story of the green garden that could.